How to get business broadband: everything you need to know!

I recently spoke with Simon Isherwood – Managing Director of SITEC IT – to set out this complex issue in simple terms, once and for all. Notably, Simon is on a one-man-mission to “de-jargon and de-mystify” IT, so I was very interested to hear what he had to say. Between us we’ve created  the definitive guide to business broadband in plain English.

Michael: These days, most of us are reasonably familiar with residential broadband. Who supplies it, what I need to run it, how I get connected etc. Much of this has become increasingly streamlined over the years. It’s easier and easier for home users to quickly get connected to the Internet. And yet on the other hand business broadband appears to be an altogether thornier and more complicated subject.

Simon: That’s absolutely right. To some extent, business broadband has much in common with residential internet access. However there is so much more to consider with a business connection. Reliability, security, performance and capacity are critical for a business user. Consequently, business broadband products have some key differences and are more complicated and expensive as a result.

Michael: I’ve boiled down the subject to 8 essential questions all businesses need answering about business broadband. If I may, I’ll fire these at you at now.

Simon: Sure. Go ahead!

1. What level of broadband service do you want?

Simon: Ha! Most people answer: “As fast as possible please!”

The correct question is really “How much speed do you need?” I would recommend around 6–8Mb per second (Mbps) download speed as the very minimum requirement. This would be enough for up to 3 users. For each additional user, add an extra 2Mbps. For typical internet use – browsing the web, checking email etc – these figures will usually be sufficient.

Michael: OK – and what about if you’re doing rather more than that? Moving large files or streaming video, perhaps?

Simon: In that case, fundamentally you’ll need more bandwidth – especially if you have people using the connection for video and moving large files at the same time. Typically, I’d say the general requirement of 2Mbps per person should be increased to between 5 and 10Mbps per person. Just bear in mind that in many cases not all users will be using the connection simultaneously. Consider just how often you will really require access at that level .

Michael: But the rule of thumb is more than the minimum is always better?

[a7-jargon-buster]
Mbps stands for Megabits per second. The amount of data that that can be transferred per second. A bit is the smallest division of data – it’s short for binary digit – a zero or a one.

Note the lower case ‘b’: it’s Mb, not MB. MB is short for megabyte, not megabit. There are 8 bits in a byte, so it’s an important distinction. Computer hard disks and memory sizes are measured in bytes, kilobytes, megabytes and gigabytes, which can lead to some confusion.
[/a7-jargon-buster]

2. What business broadband services might be available in my area?

Additionally, the type of service available in your area will also affect available speed. A bit technical but contention ratios – the ratio of the potential maximum demand (based on number of people using the service in your area) to the available bandwidth in the same area – will also determine available speeds. Business broadband has a lower contention ratio than residential broadband, meaning fewer users simultaneously using the same capacity and therefore providing better performance.

Michael: I’ll come back to the type of services in a moment…

3. Which business broadband companies serve a particular building or area?

Simon: Most of the major players will be able to serve a building, be it either Virgin Media, BT or one of the lesser-known operators, such as CityFibre. Most of the other brand names you’ll have heard of will typically be using BT infrastructure to supply their service to your premises. Also bear in mind that Satellite Broadband, such as provided by Avanti is also an option for some offices. Although please be aware that installation of external satellite equipment will be subject to a site survey, which will make lead times longer.

4. What types of business broadband service do they provide?

Simon: Typically, the major players will offer one or more broadband services from these 5 options:

Michael: When you say “dedicated”…?

Simon: I mean “not used by anyone else” – with fixed, scalable, guaranteed super-fast speeds. The cost usually limits leased line services to larger companies. Speeds typically range from 2Mbps to 10Gbps (Gigabits per second) and prices vary accordingly.
[a7-jargon-buster]

Historically download speed was prioritised over upload speed, because slow downloads affected us more than slow uploads. Waiting for a slow website to load is irritating, whereas we won’t notice an email with an attachment that takes slightly longer than usual to send.

However as the way we use the Internet has evolved and the infrastructure which supports it has improved (e.g. the cloud and social media), faster upload speeds have become more important.
[/a7-jargon-buster]

5. What physical elements of the building impact on business broadband installation?

Simon: First of all, regardless of the type of connection, broadband equipment would be installed either in a secure communal area, a dedicated communal comms room or direct to a point in your office.

…all without without compromising the building’s security…

Michael: …which would require a wayleave, presumably?

Simon: Yes. Firstly, before installing any equipment, you will need a wayleave. Wayleaves are written consent/ permission to carry out work on privately owned land. The broadband supplier will require a wayleave from the landlord to install, maintain or repair their equipment on the premises. Especially relevant, without a signed wayleave, the provider would not be able to proceed with the installation of any equipment required for your broadband service.

Michael: Landlords and their managing agents are very familiar with the need for these. Once they’re happy that any work will be carried out professionally without any negative impact, the process should be straightforward.

6. What are the initial and recurring costs of business broadband?

Simon: Costs are entirely dependent on the level of service required and will, of course, vary from provider to provider to some extent.

However, the broadband market is exceptionally competitive so costs are usually at similar levels for most providers. Most noteworthy, any variations are typically dependent on  SLAs (Service Level Agreements) and response times for locating and repairing faults.

7. What lead time is applicable?

Simon: Lead times can vary, once again dependent on the level of service; anything from 2 weeks to several months depending on whether your service type requires a site survey.

Michael: Don’t *all *installations require a site survey?
Simon: Not all, no. Typically, satellite broadband will need a site survey to assess the suitability of the service and location of the equipment. But other installations are usually far more straightforward.

The rule of thumb: plan for the worst-case scenario and make sure your research is completed as early as possible. It should go without saying that any business cannot function without access to the Internet. Without a doubt,  avoid starting your lease (or at least paying any rent etc) without a broadband connection up and running.

Michael: Absolutely. These days, landlords fully understand that the space is of no value to you unless broadband is up and running by the time you move in!

8. Why can’t I just use home consumer broadband, which looks considerably cheaper than business broadband?

Simon: Standard home consumer broadband services differ from business products in a number of key areas, making them largely unsuitable for serious business requirements. Critically, although consumer products seem cheaper on the face of it, running your business using a residential connection can, in the long run, lose you money – potentially in significant amounts. Additionally it will deny you some key benefits of business broadband.

Consumer broadband seems cheaper, but running a business on it may cost you and deny you key benefits

Michael: So what are the the main differences?

Simon: There are 4 key ones:

Simon: Sorry – acronyms! Without getting too techy, IP stands for Internet Protocol:  this is the way that computers communicate with each other, both over an internal company network and also an external one such as the Internet. Simply put, an IP address is a unique number that identifies each computer and allows them to talk to each other.

Most residential broadband connections have a dynamic IP address, temporarily leased (meaning assigned) to your connection by your ISP (Internet Service Provider). A dynamic IP address lease typically lasts for a few days before being updated and re-allocated by the ISP.

On the other hand, a static IP address lasts the length of your contract. It’s essential for a business needing remote access to their office systems. Because a static IP address is consistent, it means means a remote user’s PC, tablet, phone or network will always know where to find and login into your office system via the internet worldwide, regardless of that user’s location.

Michael: Thank you. That’s all very clear now. Finally, are you able to give us a rough idea of costs, based on a theoretical example? That way, anyone reading this can use it a guide to see how the various costs might stack up for their business.

Michael: My example is based on an office of about 1000 ft2 to be occupied by about 12 people. Additionally, they need a good service, preferably fibre, as they do expect to be moving large files regularly. Based on your guidelines, they have decided that they need 5 Mbps per person, hence a total of 60Mbps as a minimum.

To stress, this is only a template – a starting point to help you work out the one-off and recurring costs that you will incur.

Michael: Thank you very much for your time, Simon. That was very useful.

I hope we have given you a (largely) technobabble-free explanation of what you need to “get your head around” this slightly confusing subject – yet another task to deal with when you move to a new office. 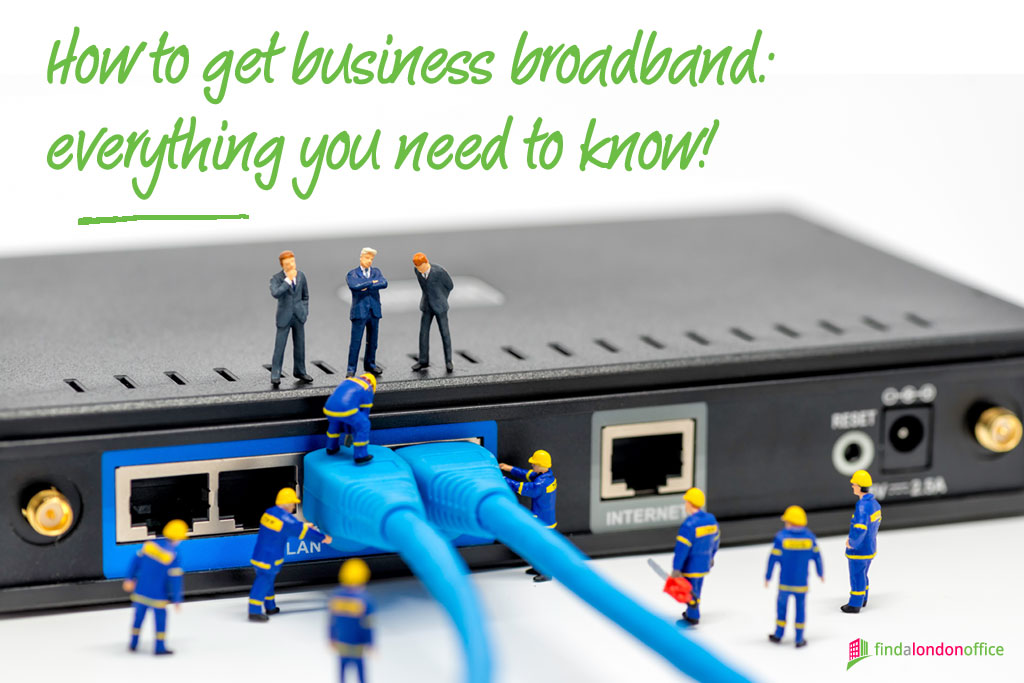