Use the office space calculator to work out how much space you need, and how much it will cost to rent office space in Canary Wharf.

A guide to Mayfair in London from a commercial perspective. The guide is aimed at businesses looking for office space in Mayfair or London in general.

Canary Wharf is a lower budget than comparable places in the city, which makes it quite an attractive option.

Canary Wharf: a commercial guide for businesses looking for office space in London

I know lots of professional people living in London who’ve never even been to Canary Wharf and they’d be amazed to know that today it’s the second largest financial area in the whole of the UK. It’s about six miles east of the city, and it’s got about 16 million square feet of office and retail space. Canary Wharf was built on derelict docklands in the 1980s and today it’s full of shiny glass and steel tower blocks. The area over the years has become very well connected indeed, you’ve got the docklands light railway taking you to the city, or to London City Airport. On the tube you’ve got the Jubilee Line, and cross rail Elizabeth Line is going to open in Canary Wharf at the end of 2018, which is going to make much reduced travel distances to key places. So for example Liverpool Street will only be seven minutes away, Bond Street in the heart of Mayfair will be 13 minutes away and Heathrow Airport you’ll be able to get to in less than 40 minutes.

When you think of Canary Wharf you obviously think of great big tall buildings, and indeed One Canada Square when it was built was the tallest building in the UK. Today it’s dwarfed, and it’s about 235 meters I should say, it’s dwarfed today by the Shard at 306 meters. But to give some international perspective the tallest building in the world, the Burj Khalifa is actually 828 meters, which I find personally astonishing.

Canary Wharf has got all the amenities, restaurants, bars, shops, things like that, that you’d expect in a location full of office users and also with a growing residential population. The tower blocks are very largely occupied by very big banks and household names, companies that want entire buildings or great big floors in buildings. They’ve made it their European HQ, companies like City Group, Clifford Charles, Credit Suisse, HSBC, Deutsche Bank and huge big companies. But interestingly tower blocks are very flexible, or floors within tower blocks are very flexible. So they’re very sub divisible and they can easily be made suitable for smaller occupiers, people wanting flexible leases, smaller spaces, even co workers and companies like that.

Canary Wharf is a lower budget than comparable places in the city, which makes it quite an attractive option. There are also low rise buildings offering again budget accommodation, compared to alternatives in other key areas in central London. You’d expect my favorite location, my favorite spot in Canary Wharf to be a glamorous location on top of a tower. But actually it’s the very tiny Everyman cinema in Cross Rail place.

If you’re looking for office space in Canary Wharf, please start your search by clicking on the button below.

A snapshot of the latest commercial property in Canary Wharf 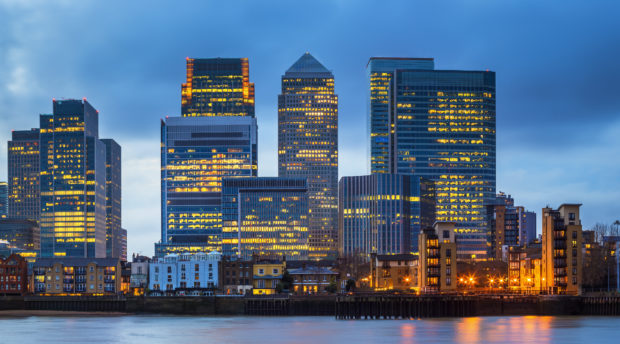 Canary Wharf – located to the East in London E14 on the banks of the meandering Thames – is the UK’s second key financial centre, alongside the City of London. Construction began in the 1980s on derelict docklands and it is London’s newest business district. Uniquely amongst the other commercial areas in London, the architecture is 100% modern, and it is home to some of Europe’s tallest buildings, including One Canada Square. Canary Wharf boasts fabulous river views, extensive shopping and dining options.

Whether you’re looking for long-term leased office space, or flexible, serviced offices, Canary Wharf is an excellent, popular location for start-ups and established businesses alike. Canary Wharf co-working space and meeting rooms are also great alternatives for businesses who value flexibility above all else. Finally, a virtual office in Canary Wharf will give your business a prestigious address, without the expensive overhead of physical space.

Canary Wharf has excellent transport links – with the Jubilee Line on the Tube and the DLR (Docklands Light Railway) connecting via Stratford International and the Eurostar to mainland Europe. Bus and River Bus services are available, along with Cycle Superhighway CS3. The brand new, imposing train station built for the Elizabeth Line (Crossrail) service opens in 2018, further improving Canary Wharf’s connections to Central and West London and beyond. London City Airport is only a 15 minute cab ride or 25 minutes on the DLR/Tube. These first-class transport facilities – combined with a prestigous address alongside some household names –  make Canary Wharf offices an attractive and persuasive proposition for an aspiring business.

The most sought after office locations within Canary Wharf include:

These types of office can all be found in Canary Wharf:

Let us find you an office in Canary Wharf