Bloomsbury At a glance...

...if you're a northern based company and want a London office, it's terrific to get to Bloomsbury because of the three mainline stations, St. Pancras, Euston, and King's Cross.

Bloomsbury: a commercial guide for businesses looking for office space in London

Bloomsbury is a district essentially just above Covent Garden. It’s history is that it’s traditionally the home of the publishing sector, but there are many other types of occupiers there. They were historically attracted to the area because there were some big buildings built, and in those days, they were considered pretty much state of the art, and very good for a modern office. There hasn’t actually been an awful lot of redevelopment in that area since. There has been some, but not as in some areas. It has attracted other companies, media, and that type of occupier. This is largely driven by the lower rents in the area.

There’s another driver for this area, and that’s that if you’re a northern based company and want a London office, it’s terrific to get to Bloomsbury because of the three mainline stations, St. Pancras, Euston, and King’s Cross. You can come into those stations and walk into your office, really very easily. It’s a cost effective location, and it’s an interesting area. What’s so good about it? Well, it’s really driven by those three stations. And of course, great interest is St. Pancras Station itself with its gaudy like architecture, recently refurbished, and it really is a superb bit of architecture.

Looking for office space in Bloomsbury?

If you’re looking for office space in Bloomsbury, please start your search by clicking on the button below.

Compare office rent in Bloomsbury to rent other London locations.

Use the office space calculator to work out how much space you need, and how much it will cost to rent office space in Bloomsbury. 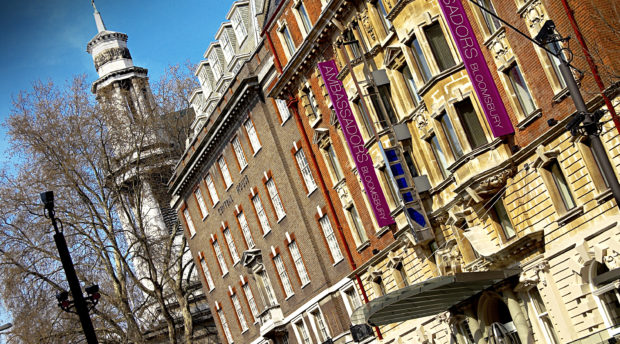 Bloomsbury is situated east of Tottenham Court Road and Soho, running up to Euston Square at the top of Gower Street, with Holborn to the east and Covent Garden to the south of New Oxford Street

Modern Bloomsbury was developed during the 16th and 17th Century, initially as a largely residential area. Steeped in literary history, Bloomsbury now has a great variety of real estate, including the British Museum, Great Ormond Street Children’s Hospital and famous University of London colleges such as UCL. The London office headquarters of Bloomsbury Publishing PLC – now a global brand – is in Bedford Square.

Offices are often found in the garden squares that dominate the area – Bloomsbury Square, Bedford Square, Russell Square and Gordon Square, for example. With a full range of buildings, office space in Bloomsbury attracts every type of business – from publishers to government departments, media companies, professionals and financial services.

As is the case across most of central London, a wide range of office types can be found in Bloomsbury: offices to let on traditional long-term leases remain the most common type of space for the time being, athough flexible, serviced offices in Bloomsbury are are rapidly growing in demand and availability. Bloomsbury co-working space, virtual offices and flexible meeting rooms are also popular options – particularly for start up businesses. These alternative spaces are quickly transforming the London office market – and Bloomsbury is no exception.

Offices in Bloomsbury are considerably cheaper than more central locations, but the area has very good communications with the newly redeveloped Tottenham Court Road tube station – transformed for the new Elizabeth Line (Crossrail) opening in 2018. For national rail, Euston Station is to the north.

The most sought after office locations within Bloomsbury include:

Types of Office available in Bloomsbury

These types of office can all be found in Bloomsbury:

Other commercial office locations near Bloomsbury

Need help with your office search?

The whole process was turned around in 2 working days and we are delighted with our new office.