Compare office rent in Soho to rent other London locations.

...a lot of companies that used to be in Mayfair have now chosen Soho, because of the rising Mayfair rents; so they've crossed Regent Street.

Soho: a commercial guide for businesses looking for office space in London

Soho is immediately to the east of Mayfair, and it has a very clear boundary between Mayfair and Soho, and that’s Regent Street. The area is great from a communications point of view. There are tube stations all over the place, and frankly it’s hard to be far from one of them.

Till the 1980s it was known especially for its nightlife, clubs, jazz clubs, eating establishments, that sort of thing, but, in recent years there’s been quite a lot of redevelopment. So, there is space there for large companies should they choose Soho. Interestingly, quite a lot of companies that used to be in Mayfair have now chosen Soho, because of the rising Mayfair rents; so they’ve crossed Regent Street, and they’re now in Soho.

One of the side effects of that is of course it’s, as the rents have risen in Soho, priced out a lot of the media companies, who’ve now, well, some still remain. A lot of them have had to go to places which we would describe as lower cost options, which is Clerkenwell, north of Oxford Street, those sort of areas where they can still get in to the center of the media area, but they bring their overheads down quite a lot.

The whole area, as I’ve said, has great atmosphere. Turn every corner, and there’s something new, interesting, just very pleasant. It’s reputed there are still many of some would call accommodating establishments for people to visit after their work hours.

Looking for office space in Soho?

If you’re looking for office space in Soho, please start your search by clicking on the button below.

A snapshot of the latest commercial property in Soho 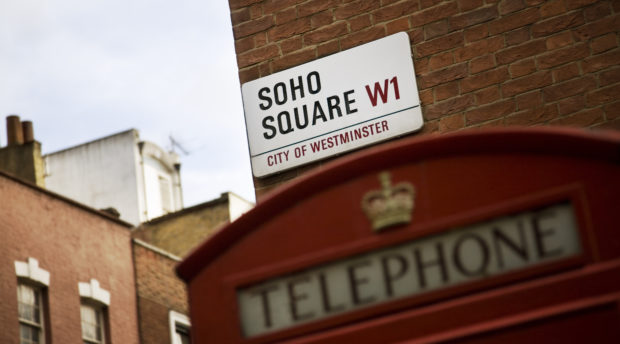 Soho – immediately to the East of Mayfair in London’s West End, spanning London W1F and W1D –  has a long-established reputation for entertainment. Soho has its own distinctive culture and a vibrant nightlife. The original Soho House private members’ club (now a worldwide brand) is based here. Until the 1980s, Soho was also associated with the sex industry, but in recent decades, the area has undergone extensive – and for some, controversial – gentrification.

Soho is traditionally the home of the media industry: for decades, leading film and post-production companies have visibly dominated Soho office space. As Soho office rents have risen, some elements of the media industry have moved away from the West End to more cost-effective locations, to be replaced by a variety of non-media companies. Some of the corporate office occupiers have moved from the even more pricey Mayfair – across Regent Street – to fill the void in Soho.

Regardless of the occupiers, Soho office space with a traditional lease continues to very diverse: from top grade air conditioning premises to the most modest – much of the latter being converted from old light industrial buildings and houses.  Serviced offices in Soho – including co-working space – are increasingly the choice of both start ups and established businesses who value flexibility. Virtual offices and meeting rooms for hire are also available – usually from serviced and coworking operators.

Communications in Soho are excellent, with Tube stations never more than a few minutes walk and for Charing Cross Station to the south for mainline train services.

Despite rising in recent years, Soho office rents are significantly cheaper than neighbouring Mayfair on the other side of Regent St.

The most sought after office locations within Soho include:

Types of Office available in Soho

These types of office can all be found in Soho:

Other commercial office locations near Soho

Let us find you a Soho office