Farringdon & Clerkenwell At a glance...

Farringdon & Clerkenwell: a commercial guide for businesses looking for office space in London

Farringdon is the city’s cooler cousin. It’s east of Holborn, north of the city, and it’s already got very good communications. It’s got Barbican station and Farringdon station, and Farringdon itself is going to get quite a lot better in December 2018 when they finally open the Elizabeth line.

The area, years ago, or in the last century was pretty industrial, pretty inner-city. But in the late 1990s, developers really saw an opportunity to bring residential and office spaces to life there, to create what they then called “loft living”. Today it is full of warehouse types of office buildings, with high ceilings, lots of light, exposed surfaces. And it really attracts people in the creative industries.

My favorite spot in Clerkenwell is an unusual spot, it’s a medieval graveyard in the north side of St. John’s Square in the heart of Farringdon.

If you’re looking for office space in Farringdon & Clerkenwell, please start your search by clicking on the button below.

Use the office space calculator to work out how much space you need, and how much it will cost to rent office space in Farringdon & Clerkenwell. 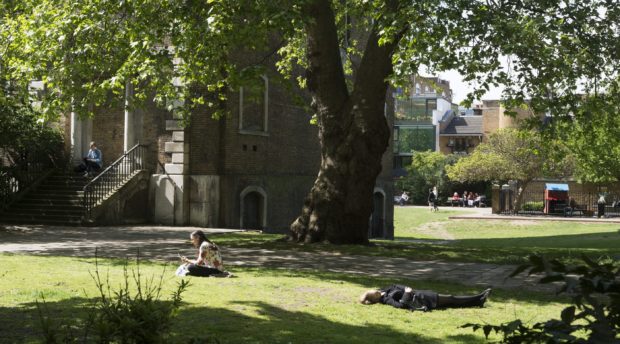 Farringdon & Clerkenwell lie east of Holborn and north of the City of London. Historically the area more an industrial than an office location. Indeed, Farringdon still houses Smithfield Meat market, one of the largest meat markets in Europe. Fashionably, Farringdon and Clerkenwell have now come to be regarded as the City’s cooler, neighbouring cousin!

Since office and residential demand expanded in the 1990s, developers saw the potential to convert industrial buildings to provide “loft living” and desirable office space with a “warehouse” feel. Despite a few cyclical dips in the market, Farringdon and Clerkenwell have never looked back.

Because of sizeable residential population, Farringdon and Clerkenwell remain alive after hours and over the weekend. The area has good local restaurants, ranging from “greasy spoons” to fancy French restaurants, numerous pubs and bistros. Furthermore, most of the shops are independent retailers, rather than the usual high street chains. For the Arts, Sadler’s Wells hosts world leading ballet and dance companies. And the area is also home to a host of cultural facilities at Barbican.

Without a doubt, radically improved communications will prompt more companies rent Farringdon office space. National and tube services are already available at Barbican Station and Farringdon Station. In addition, in December 2018 the Elizabeth Line (Crossrail) will open at Farrindon, transforming it into one of the busiest stations in Britain, with over 140 trains passing though per hour. The Elizabeth Line will connect with existing Thameslink and the London Underground lines at Farringdon. Most importantly, travel times to other parts of central London – Paddington, Oxford Street, Bloomsbury and Canary Wharf – as well as suburban London and Heathrow Airport will be hugely improved.

The most sought after office locations within Farringdon & Clerkenwell include:

These types of office can all be found in Farringdon & Clerkenwell:

Let us find you an office in Farringdon & Clerkenwell