Since a raft of rather better economic news in the summer, here at Find a London Office we’ve seen some definite signs that the economy is on the mend. The number of businesses actively looking for office space and contacting us for help has risen dramatically since September, and as Ian predicted last month, central London 0ffice rents are expected to rise as demand begins to outstrip supply.

Time to take the plunge and start looking for office space?

So is is time to take the plunge and start looking for your new office? And if so which route should you go? Serviced office space or a conventional lease? 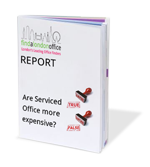 Many businesses will have taken a serviced office first or second time around – it’s a short term commitment, and has in-built flexibility should the business expand. And many businesses will plump for serviced even though they knew this was a more expensive way to accommodate “the team”. And while keeping costs down was a priority during an economic downturn, the flexibility of serviced – not to mention the fear of being tied into a long term lease in an unpredictable environment – was actually more compelling for many small businesses.

So this time, now that the economy has taken to significant steps towards normality, are you better off taking a conventional lease for say 2-5 years?

The received wisdom is that a conventional lease is much cheaper in the long run than a serviced office.

But is that really true? Is a serviced office really more expensive than a conventional lease

We decided to compare the 2 options, largely to see roughly how much more expensive serviced offices were, and there was an surprising result. We’ve prepared a report to publish our findings.

If you are asking yourself this question, you need to read our report comparing the costs of serviced and conventionally leased office space.

We have serviced office location guides for each of our 19 London locations: