Read more... London: a city on hold as the second wave arrives

UPDATED 29-4-2016: The London Marathon – what a fantastic experience, superbly organised and wonderfully supported throughout! Thank you to everyone who supported me –  in person, on Facebook and Twitter or by phone or text message – you were all great! And thank you to everyone who donated to Woking Hospice. We’ve now raised over £2,600. During the race, I had the photo of my brother-in-law, William, on my back, which genuinely helped me when the going got tough. And the last 12km were increasingly tough – my legs were pretty much shot by the time I was in sight of Big Ben. But I made it to the finish line with a time of 5:05:44. An experience of a lifetime!

This weekend I’m joining 38,000 other runners in the London Marathon.

Five years ago I would never have considered myself a runner – chiefly because I wasn’t one! Although not dreadfully unfit, I’d probably have been short of breath running for the bus, if I’m honest. I’m not sure what motivated me to start – the onset of middle-aged spread once I’d turned 40, perhaps? And yet start I did, tentatively at first with short, 1km jogs. Five years later, with half a dozen half-marathons under my belt, I am a few days away from my first full marathon. Gulp!

I’m sure I’ll be nervous on the day – although the training has gone well; I’ve stuck to the coaching programme on my iPhone and I feel ready for the challenge. Although running a marathon is inevitably going to be tough – particularly the last 10km or so, I’m determined to make sure I take in the occasion and the atmosphere.

Born and brought up in London, I’m really looking forward to running amongst the city’s iconic landmarks. As part of my race week preparations I’ve been having a look at the course map – starting south of the River Thames in Greenwich, the first 3 miles head east to Woolwich before double-backing to Greenwich again, past the Cutty Sark and through Deptford to Surrey Quays. We’ll then be following the Thames westwards through Bermondsey, finally crossing the river at Tower Bridge. Heading east once again we’ll loop though Docklands and re-trace our steps to Tower Bridge, this time staying north of the river. The penultimate section sticks close to the river, through the City of London and on to Victoria Embankment, hanging a right at Big Ben, across Parliament Square and down Birdcage Walk south of St James’s Park to our right. And finally double backing at Buckingham Palace to the finish line along the Mall.

My motivation for running the London Marathon?

Beyond running further than I have ever run before, I have 3 other motivations for completing the 26 miles. Firstly, over the last few years my running progress has run in parallel to Clive – my brother-in-law. When we first tackled a 5k, we ran it together. Ditto 10k and half-marathon. However, last year he ran the London Marathon, whilst I sat it out – I just didn’t have the spare time to commit to the training schedule. Watching him run it alone last year, gave me the impetus to enter this year’s event (he’s running it again this year).

Secondly I’m raising money for Woking and Sam Beare Hospices. I’ve been connected to the Hospices in one way or another for the past 9 years; I built and maintain their current website and they were kind enough to offer me one of their Marathon places.

Thirdly, we lost my wife’s brother, William, after a short battle lung cancer last October only a few weeks after his 50th Birthday. So on Sunday, I’m running in memory of William.

I’ll update this page next week to let you know how I got on…. 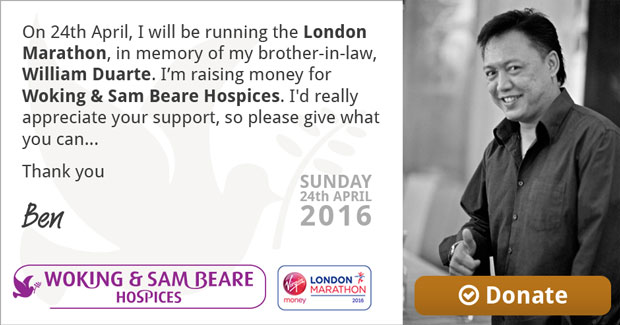