Would the right to disconnect from email boost productivity?

Read more... Mother nature reasserts herself, but who let the bears out?

After a long day’s work and the commuter battle, the last thing anyone wants is to read a deluge of emails from the boss or your colleagues. For most employees there is no contractual obligation to respond or even read emails when you’re off duty. Begrudgingly, however, most of us probably will reply, even if it’s last thing at night before we turn in. The compulsion to impress or simply present ourselves as decent employees is strong. But when I think about it, most of my emails aren’t actually urgent or in need of an instant response.

More importantly, is this type of after-work activity actually detrimental to our health and counter-productive for those businesses that employ us? Would the right to disconnect after hours fundamentally boost productivity?

What are the consequences of after-hours emails?

William Becker, a Virginia Tech associate professor of management in the Pamplin College of Business has recently studied the effects of after work emails – both on employees themselves and their relationships. His studies looked at full time workers between the ages of 31-40. Whilst many employees claimed not to notice any difference, plenty of their partners disagreed.

The results showed that late night emails increased stress, reduced sleep quality, and caused anxiety. All of these symptoms can of course contribute to relationship difficulties and general unhappiness.  The research shows that expectation to monitor work emails alone is enough to cause stress.

Becker’s study concluded that “even during the times when there are no actual emails to act upon, the mere norm of availability and the actual anticipation of work create a constant stressor that precludes an employee from work detachment…Such expectations – whether real or imagined – cause more problems, including burnout and work-life balance problems, than the actual time it takes to read and respond to after-hours emails.”

Work/Life balance versus the “always-on” culture

Technology has blurred the line between work and play, making a work-life balance far harder to maintain. The “always-on” work culture is effectively unpaid overtime. Furthermore, the evidence suggests that this practice not only has detrimental effects on the individuals directly. Ultimately it will negatively impact the organisations who employ them.

Technology has blurred the line between work and play, making a work-life balance far harder to maintain. The “always-on” work culture is effectively unpaid overtime.

The French solution: the right to disconnect

In 2017, France passed a law giving employees of companies with more than 50 workers the “right to disconnect”. The following year, the French arm of British pest control company Rentokil Initial were the first company to fall foul of the new law. The court ordered them to pay £53,000 to a former employee for failing to respect his “right to disconnect”. When introduced, the law was widely mocked around the world. Eyes rolled as it followed the introduction of the 35-hour week and a long statutory holiday allowance. However, the hourly productivity rate in France is amongst the highest worldwide.

Here in the UK, many workers will handle emails after hours. And yet the hours worked per week by UK employees already rank amongst the highest in Europe. The UK’s average of nearly 42 hours worked a week by full time employees contrasts with the European average of 40.3 hours. The UK is beaten only by Greece and Austria, who work an average of 43.7 hours per week. It’s worth observing that this particular study only focused on time spent at work and does not include any after work emails. Notably, despite – or perhaps because of – the long hours, the UK’s productivity rate is stuck firmly in the mid-range of European countries.

Should UK business rethink the “always-on” culture and grant the right to disconnect?

It’s unlikely the UK would imitate France’s top-down approach with legislation. However, is it time for forward thinking UK businesses to rethink the “always-on” culture, not just for altruistic reasons, but for their own self-interest? The evidence suggests that the “right to disconnect” can lead to far higher productivity.

We all need time to switch off – literally and figuratively. It makes sense that properly refreshed employees will lead happier personal lives and therefore be more productive in their work. 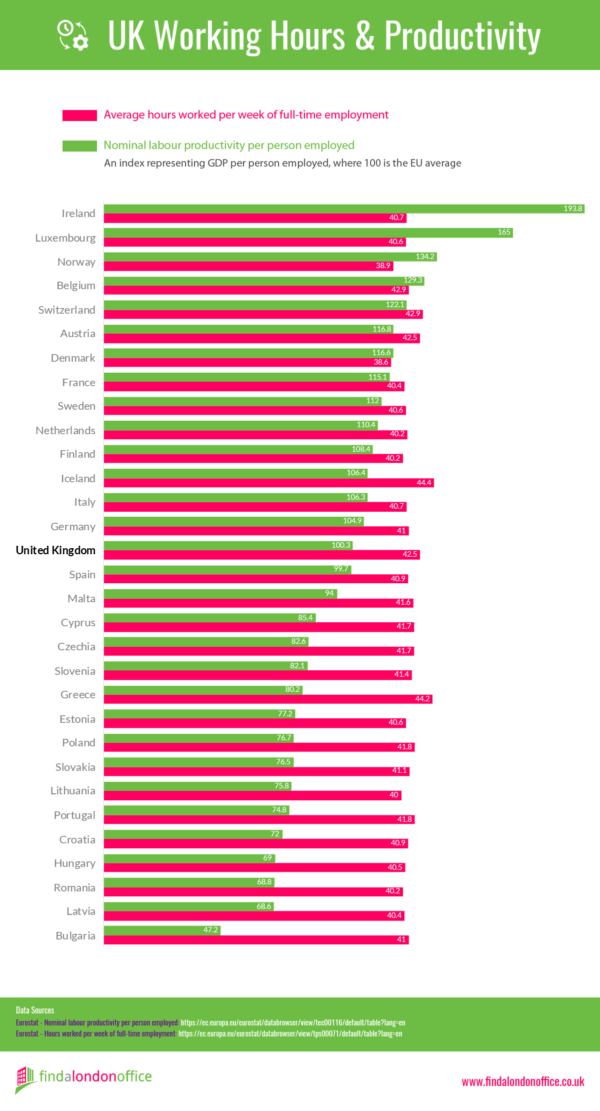