Ian Kitchener
31st January 2020
What is now the safest form of transport in London?

I have been writing for years about office rent in central London. Fascinating subject (yawn) – lucky me!

Since the run up to the referendum in 2016, the real challenge to writing anything interesting is this: headline London office rents have hardly shifted! Truth be told, they should have fallen in lots of areas across the capital. Instead landlords have generally held firm on rent, using extended rent-free periods to attract tenants. Nevertheless, static office rent is making writing these quarterly updates really tough!

So how does the current unbudging nature of rent play out in the real world?

Three examples, but you get the problem. Writing about static office rent just ain’t been interesting.  Indeed if I’d taught my cat the headline office rent in key central London areas back in 2015 and he’s repeated the same figures over the interim period, he would have performed as well as me!

If I’d taught my cat the office rents across central London in 2015 and he repeated the same figures since, he would have performed as well as me!

So there you are. Unless the market moves shortly,  my next blog in March will be about my cycle commute again.

How to negotiate savings when rent won’t budge

Meantime, if you have reached this point in the blog without nodding off, you may be asking yourself the following question: why anyone would ask Find a London Office to find offices and negotiate deals, during a period of static office rent?

Joking aside, the reason is of course simple. We source amazing office space throughout central London. We cover 19 sub markets from the West End through to Docklands. And we help negotiate great tenant incentives behind the quoting rent. As an aide-mémoire, here is our latest London office rent guide updated for the December quarter at the end of last year. 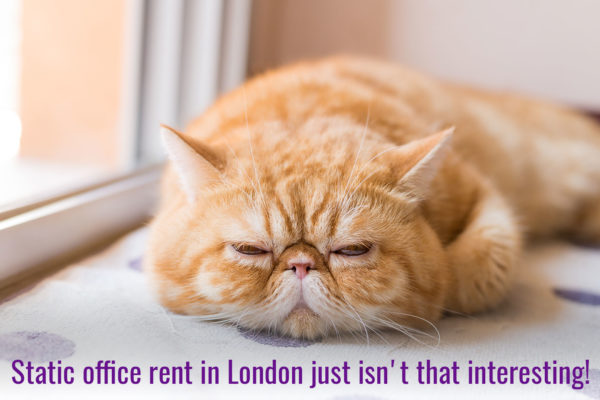