What is now the safest form of transport in London?

When I wrote the first draft of this post back in February – a mere 5 months ago – the words safest form of transport meant something completely different. Who would have guessed back then that wed be discussing safety on public transport using terms such as social distancing and debating whether face masks should be compulsory on the tube or bus? But then the global pandemic upturned so much about things weve always taken for granted.

As I write, most the government is still urging most London office workers to work from home if they can. But with retail and hospitality now re-opened, commuters and consumers are starting to move into, out of and around the city once again. So the choices we make about transport – both collectively and individually – are becoming essential in the wake of the pandemic.

Who would have guessed back in February that wed be discussing safety on public transport using terms such as social distancing and debating whether face masks should be compulsory on the tube?

Talking in purely pre-pandemic terms, transport in London is relatively safe , when compared to many other cities around the world. In Bangkok for example, even crossing the road safely is quite an achievement.

However, despite this, the number of people who are killed or seriously injured on Londons roads is still surprisingly high. The good news is that the number of deaths has fallen 47% in the 10 years to 2018. Similarly, the number of serious injuries over the same period wasdown by 37%.

How do the safety records of various types of transport used in London compare?

To work out the safest form of transport, let’s look first at the breakdown of serious injuries and fatalities in London during 2018:

What is the capital’s safest form of transport?

Taking these figures at face value, the bus looks to be the safest form of transport in London with cycling and cars jockeying for second place. However if we apply some context, it’s clear that it’s more complicated than that.

The number of cyclists killed or seriously injured has actually risen by 6% in the past decade. Putting that into perspective, however, the number of journeys cycled – 720,000 per day – has doubled since the turn of the millennium. Cycling increased by 8% in Central London in 2018 alone. Having said that, pedestrians, motorcyclists and cyclists accounted for 79% of all deaths or serious injuries in 2018. Clearly, we need to do far more to make Londons streets safer for those most at risk.

Only around 30% of pedestrians killed or seriously injured took place on either an outlined crossing or on pavements. Evidently, many accidents are caused by pedestrians taking risks in crossing the road. As a confident jay walker, myself, it is important to remember that just one slip of judgement could lead to life altering injuries or worse. Similarly, cyclists killed or seriously injured are often without safety gear or using it incorrectly.

Of course, the health benefits of cycling in London hugely outweigh the dangers it presents. These health benefits are apparent both directly through exercise and indirectly by promoting a greener London environment. Cycling Weekly, despite perhaps having a slight bias, suggest that cycling to work not only benefits you both physically and mentally, it also improves the quality of sleep. If were talking about health and safety in its broadest sense, then cycling is the clear winner.

If were talking about health and safety in its broadest sense, then cycling is the clear winner.

In the pre-pandemic world, in raw numbers, public transport – the bus, the London underground and overground – was the safest form of transport in London, despite the stress caused by signal failures, leaves on the line and other delays! However, this type of transport is now obviously the least conducive to social distancing. The last thing I want to do is stand in a packed tube during rush hour, even if everyone is wearing masks! The Northern Line – the busiest tube line – carries 1200 passengers per train during peak hours. With social distancing in place, that would fall to 124 passengers. Thats not workable or sustainable, if demand returns to pre-lockdown levels.

The last thing I want to do is stand in a packed tube during rush hour, even if everyone is wearing masks!

Transport for London is now running 94% of its services, but passenger numbers are only about 20% of the levels seen this time last year. The government is currently subsidising TfL with vast sums of moneyto keep largely empty trains and buses running. Again, that’s neither workable nor sustainable. 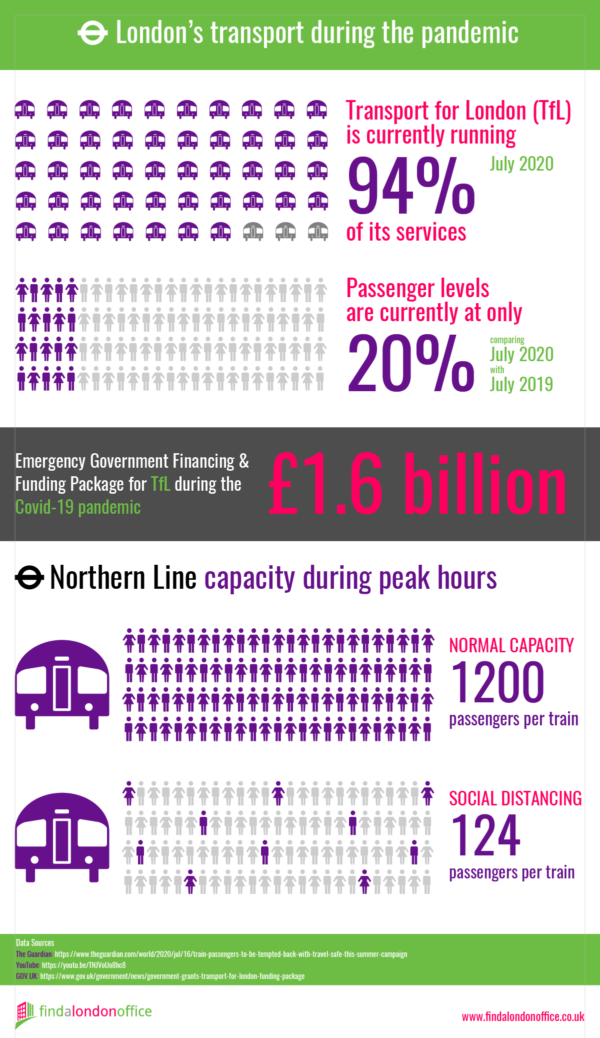 Face masks are now compulsory on all UK public transport. TfL have installed hand sanitisers throughout the Tube – in ticket halls and platform areas.They are also using a long-lasting “enhanced anti-viral fluid” to clean the network, providing up to 30 days of protection to all public and staff areas. Cleaners are paying particular attention to touch points – e.g. poles, handles and drivers controls. Time will tell if these radical measures will mitigate the huge challenges public transport faces. But I think it’s impossible to claim – in the new normal – that the tube, overground and bus are still the safest form of transport in London.

In the pre-pandemic world, public transport was the safest form of transport in London. But it’s impossible to make that claim now – in the new normal.

Opportunities for improving the safety of transport in London

Of course, crises typically present opportunities as well as challenges. This recent video from the Guardianneatly summarises both.

Most UK workers travel to work by car or van. And yet more cars are clearly not an option in cities such as London: congestion, restricted parking, pollution as well as increased risks to pedestrians, cyclists and motorcyclists. Whereas walking and cycling – along with the existing health benefits Ive mentioned – are now the safest way to travel during a pandemic.

None of the has been lost on the government, announcing 2 billion for UK wide improvements to cycling infrastructure. The Mayor has also announced several measures – most eye-catching and radical is the creation of the worlds largest car-free zone stretching across the West End and the City. Other measures include trebling the number of cycling lanes, widening pavements and further expanding the Santander bike hire scheme. These measures dovetail naturally with existing priorities, in an era when improving air quality has become a critical health concern. It will be fascinating to see the urban design innovations that emerge in the months and years ahead with benefits for public safety and the environment.

It will be fascinating to see the urban design innovations that emerge in the months and years ahead with benefits for public safety and the environment.

Furthermore, the general public also have also clearly taken on board these new priorities. Halfords – specialists in cycling and car accessories – qualified as an essential service and remained open during the lockdown. They have just announced that bike sales have rocketed by 57.1% in the 13 weeks to 3rd July, with people eagerly avoiding public transport and turning to safer alternatives.

Will London’s office workers – when they eventually return to the capital – follow suit and embrace cycling? Because taking everything into account, cycling does now appear to be the safest form of transport in London. 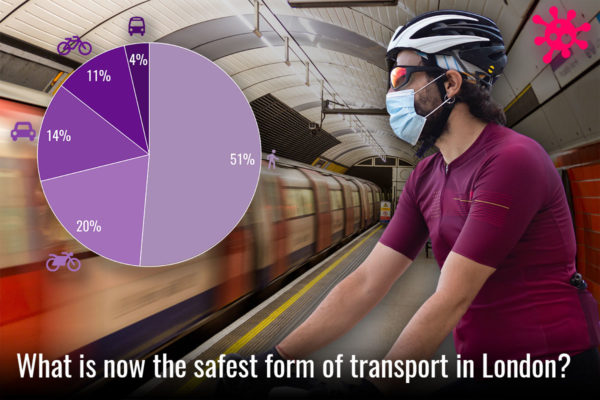