Top 6 costly mistakes to avoid when looking for London offices

Here at Find a London Office we have been dealing with commercial property deals for many, many years. We often come across sticky situations where we have to step in to rectify costly mistakes of prospective tenants. More often than not this is because they’ve made critical decisions…

It is not our intention to overly concern you about the dangers of taking office space, rather to make you aware of what can happen when you “go it alone”! Expert help is often very cost effective and beneficial. Experience is a huge advantage: we’ve made this journey many times before, so we can help you find the right office space, whilst avoiding unnecessary pitfalls!

After some head-scratching, we’ve produced a list of the top 6 costly mistakes prospective tenants have made during their search for London office space. (To “protect the innocent”, I have removed all names from the events described below. In any case they add nothing to the points being made!)

The new British MD of a Japanese company setting up in London found space in a building, whose address was No. 9. We were aware that Japanese culture believes some numbers to be unlucky, but we didn’t know which numbers. This was some years ago (pre-Google!), so we suggested that he asked the question – which he did, but not nearly thoroughly enough! He discovered that 13 was the one to avoid and proceeded with the deal – only to discover that numbers 4 and 9 are also considered unlucky. When the Japanese owner came over to the UK to finalise the deal, it was immediately pulled at great expense: legal fees, travel expenses, not to mention everyone’s time.

We eventually found space in a building with the number 8 – apparently a lucky number in Japan!

The moral of the story: check your facts thoroughly and be mindful of cultural considerations.

Check your facts thoroughly & be mindful of cultural considerations.

This one comes up frequently, now that the working day doesn’t finish at 5pm on the dot. Many people work late and need safe passage home – I’ve lost count of the number of times we have pointed out to a client that their preferred building option fails that criteria and should be rejected.

On one occasion the client – a man in his forties – was very keen on a building which was, on the face of it, very suitable for his business. However, its location was a little remote with the walk to the tube a bit “dodgy”. We made him well aware of this, yet he wasn’t overly concerned despite having employees who regularly worked late. Ultimately it was his decision of course. Despite our wealth of experience, we are just advisors and it’s not our place to tell him how to run his business. He took the building and they moved in over the summer. With the long evenings all was fine initially. Then as winter followed autumn and the nights closed in, many of his young, female staff decided that the walk in the dark after about 6pm was not for them and they either quit of refused to work late! The business had no choice but to relocate again – with all the expense, effort and upheaval that entailed.

The moral of the story: Think beyond purely commercial factors and take into account the concerns of your employees.

Think beyond purely commercial factors and take into account the concerns of your employees.

This was not one of our clients(!) , but we were aware of a tenant – acting for themselves – taking a 10 year lease when they only had a clear 5 year business plan. Compounding the error, market conditions at the time were very conducive for tenants: they could easily have negotiated a tenant break clause in the lease after 5 years and yet they never asked for one, let alone pressed for one.

The moral of the story: Market knowledge is critical to making informed choices. If you don’t have that knowledge, find someone who does…

Market knowledge is critical to making informed choices. If you don’t have it, find someone who does!

Watch for this problem! The internet has become all pervasive in our everyday business lives – to be without it or trying to survive on a weak service means that you simply cannot work. The main challenge is the time it can take to arrange and install a decent connection. If the landlord hasn’t arranged the supply in advance and there is a significant time lag before the service is installed, you have two choices: negotiate a rent free period to cover the time lag or just don’t take the space.

Just last week we heard about a company in the West End, who were close to signing a lease on new office space. Initially they been assured that getting a decent broadband service quickly was easily achievable, only to find – at the last minute – that this was not the case . On further investigation, it transpired that there was a substantial delay problem in this particular location. So the deal collapsed with both time and money wasted.

UPDATE 21st Nov 2017: Have a look at my interview with Simon Isherwood of SITEC IT about the levels and types of available business broadband services across London, how to get them, how long it should take and what the install and recurring costs are.

The moral of the story: Ensure a decent internet connection is installed in advance or make alternative arrangements.

Ensure a decent internet connection is installed in advance or make alternative arrangements.

A US client spent several months trying to find office space under his own steam and made little progress. After agreeing to help, we found him the perfect office on excellent terms. A happy client, he kindly bought me lunch afterwards and explained that as his company routinely carried out “time and motion” analysis, he had studied his own efforts to find an office before we came on board. He found that the time he spent ( in money terms ) on his own search almost exactly matched the fee that we charged him, once we’d done it all for him . His conclusion – of course – was that he should have used our services from the beginning and halved his costs!

The moral of the story: Engage an expert and save yourself time and money.

Engage an expert and save yourself time and money.

6. Planning ahead versus counting your pennies

It’s very common for prospective tenants to consider allowing extra space for future expansion (very sensible), then balk at the idea when they realise the extra cost implications! This is fully understandable, but be careful not to go too far in the other direction and fail to plan ahead: you’ll find yourself moving again almost before you’ve settled in – which has extra cost implications itself. It’s a difficult balance.

Play the “What if…” game using our office space calculator – the brainchild of a very experienced office space planner. It really does work and is straightforward to use. Enter the different types of space you need for different roles (including meeting rooms, open plan space and private offices etc.) and it will immediately calculate an estimate of the total space required in ft2 (and m2). Next, choose your preferred location and it will calculate an estimated annual cost for rent, rates and service charge in that area. Toggle between flexible, serviced space and conventionally leased space to get an instant comparison. You can experiment by adjusting the amount of space required – with each alteration it calculates an instantly revised annual budget. And the icing on the cake, it will email a breakdown of these figures to you, providing you with a permanent record to share with your colleagues. Regrettably it won’t make the decision for you, but it will save you from hours of rough calculations as you try to bottom it out!

And with the facts at your disposal, there are much better odds on you making an informed decision.

The moral of the story: Avoid wasting money by planning your current and future space requirements in a controlled way

We can safely say that anecdotal evidence suggests that Find A London Office will help you find office space, but more importantly that we bring market knowledge and experience to the party – ensuring you avoid some basic errors with costly consequences! 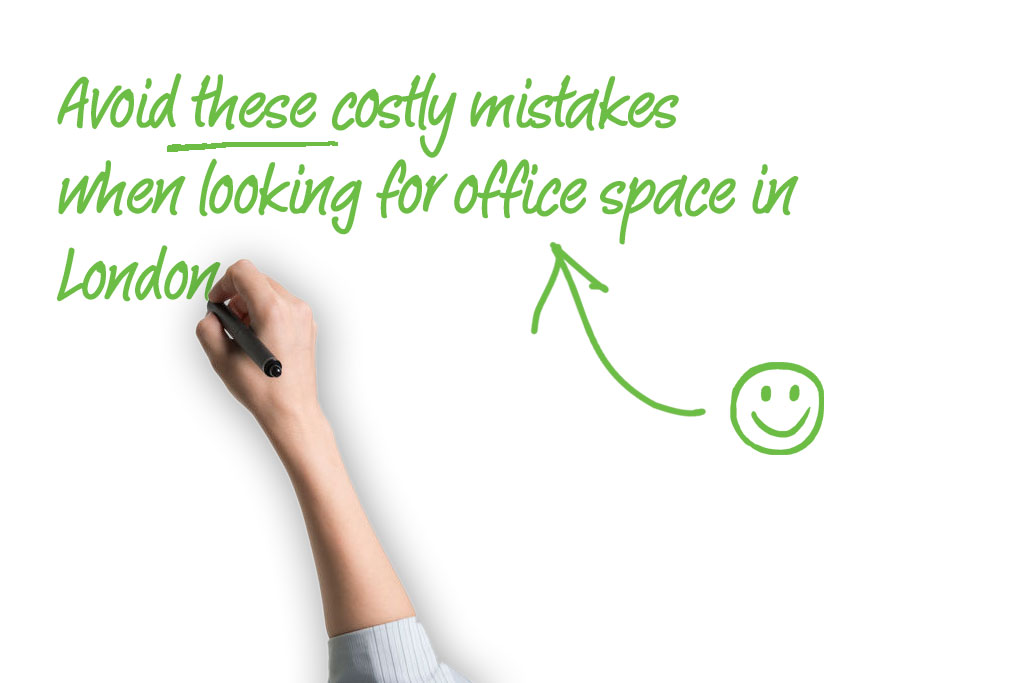